You have possibly seen the #symbiangives campaign… so what have we really given to the community by going open source?

According to Ohloh, we are giving over 40 Million lines of code between the platform and the development environment!

Ohloh estimates that the actual platform equals to 1,928 years of development effort… and here is the split of languages used in the platform: 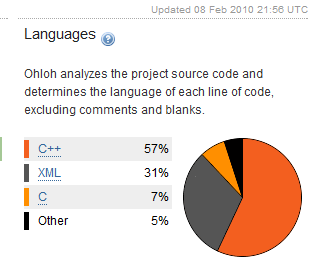 Some of you may find interesting that the platform includes 13M lines of XML and some  ADA, Lisp and a bit of AWK,  so there is something for everyone!

Our Ohloh entry hasn’t been up for that long, but it would be great to get some more support –  so if you are registered in Ohloh and use Symbian, why not join the project?

One more thing! If you where wondering how does making the largest Open Source project public in less than a year looks like, this might give you an idea:

View all posts by Victor Palau